We respect your inbox. We only send interesting and relevant emails.

The House Addicts team is committed to creating an unparalleled real estate experience for each and every client we serve, leaving everyone saying "WO...

Partaking in Summer festival's are one of the best ways to spend your weekends! The great atmospheres, weather and fun set an environment that attracts people from all over the state! From family-friendly to 21+, we've found some fun for everyone!

Starting from this weekend - mid June, make sure to check a couple of these festivals out! The Palisade International Honeybee Festival is a non-profit, community driven festival created to bring awareness to the honeybee crisis through education and the arts. The festival's goal is to increase public awareness of the impact of bees on our food sources and the wide range of benefits of bee products! Enjoy free admission, family-friendly programming, and live music and dances that celebrates children from around the world at the Denver Art Museum with their special Día del Niño (Day of the Child) Festival. The Cañon City Music & Blossom Festival celebrates the spring season and features the largest school band competition in the state, a craft fair, a rodeo, a free Kid Zone, and concludes with a parade down Main Street. The Denver Bacon And Beer Classic will take place at Sports Authority Field at Mile High and will feature over 30 original bacon dishes, 100+ craft beers, music, contests, games, and more. Where: Western Museum of Mining & Industry The Five Points Jazz Festival takes place the third Saturday of May and celebrates the history of Denver’s Five Points neighborhood. CKS Paddlefest is huge kickoff party to celebrate the start of the summer paddling season. Join them for an action-packed weekend of fun and educational activities for paddlers of all ages and abilities. 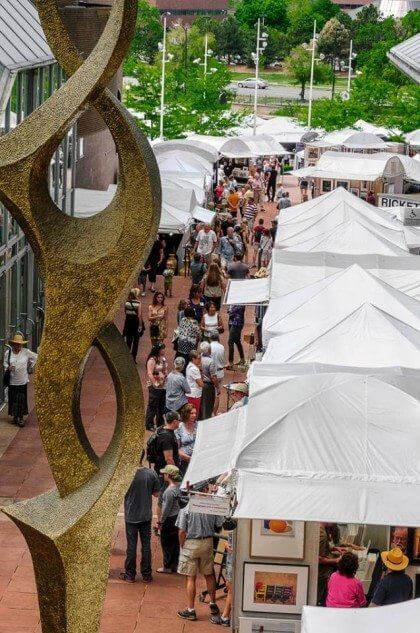 Where: Conservatory Green at Stapleton, Denver 80238

The Denver Arts Festival holds its annual premier event at Stapleton’s Conservatory Green Plaza in Northfield. The fine art and fine craft exhibition features some of Colorado’s and the nation’s best artists with over 50,000 people expected to attend. The People’s Fair is one of the largest two-day festivals in the country with over 200,000 fairgoers, and is one of Colorado’s longest-running outdoor urban festivals featuring handmade arts & crafts, food from local restaurants, kids’ activities, live local entertainment, and more. The Denver Chalk Art Festival features more than 200 professional, amateur and student artists will delight and amaze Denver locals with their incredible talents in what has become one of the city’s most treasured events. Parker Days Festival, presented by the Parker Area Chamber of Commerce, is a weekend filled with plenty of activities and entertainment including concerts, carnival rides, and a parade. A car show and farmers market will also be a part of this fun-filled weekend.

This year, Trace Adkins will be headlining the Parker Days Festival concert! Photograph courtesy of ©Town of Frisco

Where: Town of Frisco

Town of Frisco’s 23rd annual Colorado BBQ Challenge draws over 70 bbq masters that chef up their best fare and compete for a variety of awards, including the coveted Grand Champion and Reserve Champion titles. Winners of the Colorado BBQ Challenge in Frisco are eligible to compete in the American Royal – the “World Series” of barbecue. The 121st Annual Strawberry Days Festival, hosted by Glenwood Springs Chamber of Commerce, will feature live music, a FamilyFest area, an Arts and Crafts Fair, a food court, an old-fashioned carnival and a parade down Grand Avenue. Free strawberries and ice cream will be served on Saturday after the parade Recognized as one of the top ten pride events in the country, the Denver PrideFest is a celebration of community, heritage, family and culture. Produced by the Gay, Lesbian, Bisexual and Transgender Community Center of Colorado (The Center), more than 250,000 people from Colorado and surrounding areas come out to enjoy the parade, rally, music, entertainment, food and much more.

We respect your inbox. We only send interesting and relevant emails.

We use cookies to enhance your browsing experience and deliver our services. By continuing to visit this site, you agree to our use of cookies. More info